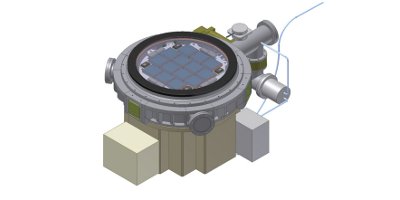 In early December, and after an international process of peer review, Brazil’s Observatório Nacional, a partner institution in the Javalambre Physics of the Accelerated Universe Astrophysical Survey collaboration ( J-PAS), and British company E2V signed a contract to provide the cryogenic camera system for the JST/T250 telescope of the Observatorio Astrofísico de Javalambre. With a total budget of 5.4 million dollars and a delivery timeframe of 24 months, the company will supply the vacuum and cooling components, all the detectors and their control electronics.

On December 2010, E2V, a leading global provider of high performance imaging sensors, was awarded the contract to manufacture the next-generation devices comprising the camera. Due to their large format, quality and functions, the devices are being developed specifically for the J-PAS project.

The camera will contain a CCD-mosaic made of 14 low-noise, high sensitivity chips as well as 12 auxiliary sensors for the telescope’s guiding and image quality control. The system, with a grand total of 1200 million pixels, will operate in vacuum at temperatures of minus 110 degrees C, and it weights 570 Kg.

The instrument, which covers an area of the focal plane 50 cm wide, will provide, once installed in the T250 telescope, a 7 square degrees field of view. Each obtained image will occupy 2 Gb of storage, generating 1000 Gb of scientific data per night for J-PAS.

Due to the exacting standards required, very few companies are capable of manufacturing these devices. The five only bids received were evaluated by members of CEFCA and the J-PAS collaboration in cooperation with independent experts from Harvard's Center for Astronomy, the California Institute of Technology (CalTech) and the European Southern Observatory.

As part of the agreement of cooperation, the cost of funding the cryogenic camera system will be shouldered by Brazil's partnering institutions. Once installed, the camera will become the property of the Observatory of Javalambre.